infosec with a slice of OT

Their was a picture of dog called “milo.jpg”. Did not try steghide or similar tools at this point.

Next up was the SMB service:

Default samba drives and no permissions.

The next service is web and hosts a static html page. The robots txt contained an odd sequence at the end:

Turned out that this is brainfuck code and used this Page for execution of the code.

The code outputted “/alfa-support” and this was a much needed hint, because my common enumeration wordlists where exhausted at this point.

Under “/alfa-support” is a static page that prints a dialog between the user Thomas and Alfa support for a password reset of his account. The dialog includes the info that thomas passwords consists out of his pet name and three digits so lets start crunch and hydra against the SSH service.

After some time hydra found the password “milo666” for thomas and found the user flag.

Started of with linpeas and found that VNC is running bound to localhost. The current user has file “.remote_secret” that seems to be a VNC password.

With the tool “vncpwd” the pswd “k!LL3rSs” was restored and forwarded the port 5901 via ssh.

Loggin in via vncviewer and root shell greets you. 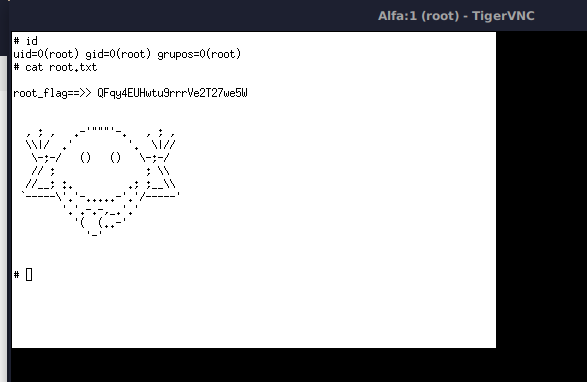 The VM is pretty straightforward and I enjoyed the VNC part a lot. Thanks to d4t4s3c for creating it!